Although survey results show that the privacy of their personal data is an important issue for online users worldwide, most users rarely make an effort to protect this data actively and often even give it away voluntarily. Privacy researchers have made several attempts to explain this dichotomy between privacy attitude and behavior, usually referred to as ‘privacy paradox’. While they proposed different theoretical explanations for the privacy paradox, as well as empirical study results concerning the relationship of individual factors on privacy behavior and attitude, no comprehensive explanation for the privacy paradox has been found so far. We aim to shed light on the privacy paradox phenomenon by summarizing the most popular theoretical privacy paradox explanations and identifying the factors that are most relevant for the prediction of privacy attitude and behavior.  Since many studies focus on the behavioral intention instead of the actual behavior, we decided to consider this topic as well.

Based on a literature review, we identify all factors that significantly predict one of the three privacy aspects and report the corresponding standardized effect sizes (β). The results provide strong evidence for the theoretical explanation approach called ‘privacy calculus’, with possibly gained benefits being among the best predictors for disclosing intention as well as actual disclosure. Other strong predictors for privacy behavior are privacy intention, willingness to disclose, privacy concerns and privacy attitude. Demographic variables play a minor role, only gender was found to weakly predict privacy behavior. Privacy attitude was best predicted by internal variables like trust towards the website, privacy concerns or computer anxiety. Despite the multiplicity of survey studies dealing with user privacy, it is not easy to draw overall conclusions, because authors often refer to slightly different constructs. We suggest the privacy research community to agree on a shared definition of the different privacy constructs to allow for conclusions beyond individual samples and study designs.

We try to give an overview about this topic on this website. Further information can be found at Explaining the privacy paradox: A systematic review of literature investigating privacy attitude and behavior: Nina Gerber, Paul Gerber, Melanie Volkamer. Computers & Security, Volume 77, August 2018, Pages 226-261.

The following section describes the most popular explanations for the privacy paradox that have been proposed so far. A prior review of possible explanation approaches can be found in Kokolakis (2017).

One of the most-established explanations for the privacy paradox is based on the theoretical concept of the ‘homo oeconomicus’. In the economic sciences, the term ‘homo oeconomicus’ refers to the prototype of an economic human, a consumer whose decisions and actions are all driven by the attempt to maximize his/her benefits (Rittenberg and Trigarthen, 2012; Flender and Müller, 2012). If this concept is applied to the privacy context, a user is expected to trade the benefits that could be earned by data disclosure off against the costs that could arise from revealing his/her data (Lee and Kwon, 2015). Typical benefits of sharing personal data include financial discounts (e.g., by participating in consumer loyalty programs), increased convenience (e.g., by keeping credit card data stored with an online retailer) or improvement of socialization (e.g., by using social networks and messengers) (Wang et al., 2015; Wilson and Valacich, 2012). Data sharing costs, on the other hand, are less tangible and include all sorts of risk and negative consequences for disclosing personal data (e.g., security impairments, identity theft, unintended third-party usage, or social criticism and humiliation) (Warshaw et al., 2015). According to the privacy calculus model, if the anticipated benefits of data sharing exceed the costs, a user is expected to willingly give his/her data away (Lee and Kwon, 2015). Nevertheless, s/he can still express concerns about the loss of his/her data, leading to the observed discrepancy between the expressed concerns or attitude and the actual behavior.

The recently described privacy calculus model postulates the existence of a rational user, who performs reasoned trade-off analyses for the decision to share (or protect) his/her data. However, numerous studies on consumer decision behavior have shown that the decision making process is affected by various cognitive biases and heuristics (Acquisti and Grossklags, 2007; Knijnenburg et al., 2013). For example, it is unlikely that every consumer accesses exhaustive information concerning all possible costs and benefits when making a data sharing decision (on the contrary, consumers are often not even aware that their data is being collected (Wakefield, 2013)). Hence, their decision is based on incomplete information, which can lead to the over- or underestimation of the costs and benefits and might therefore seem irrational to an external observer, but at the same time fairly rational to the decision maker (Flender and Müller, 2012). Furthermore, the human ability for cognitive processing is limited to a certain degree, which means even if a consumer has access to all necessary information, s/he might lack the ability to process all this information correctly and make an informed decision (Deuker, 2011). In the literature, this effect is often referred to as bounded rationality (Flender and Müller, 2012; Knijnenburg et al., 2013 ). The resulting imperfect decisions often suffer from cognitive biases, because the decision maker employs certain heuristics to compensate for his/her bounded rationality (Kokolakis, 2017; Symantec 2015; Wakefield, 2013; Zafeiropoulou et al., 2013; Tversky and Kahneman, 1974). Hence, the resulting behavior might not reflect the original intention or the expressed attitude towards that behavior. Popular examples for these cognitive biases are:

Another explanation accounts for the fact that few users have actually suffered from online privacy invasions. As a consequence, most privacy attitudes are based on heuristics or secondhand experiences. However, only personal experiences can form an attitude that is stable enough to significantly influence the corresponding behavior (Dienlin and Trepte, 2015). In addition to the resulting weak association between attitude and behavior, some users might simply lack the ability to protect their data, because they have no or only limited knowledge of technical solutions like the deletion of cookies, the encryption of e-mails or the anonymization of communication data, e.g., by using the Tor software (Baek, 2014).

Most people are not autonomous in their decision to accept or reject the usage of a messaging application, a social network or e-mail encryption software, respectively. It is rather assumed that the social environment of an individual significantly influences his/her privacy decisions and behavior (Taddicken, 2014). Especially in collectivistic cultures, where individuals possess a strong ‘we’ consciousness, do users obey to social norms (Beldad and Citra Kusumadewi, 2015). But social influence does also occur in individualistic cultures, for instance when teenagers align to the example of their parents when it comes to data sharing in social networks (Van Gool et al., 2015). In both kinds of culture include individuals usually at least to some extend the (supposed) opinion and behavior of their peers and/or family in their decision to use a specific technology or reveal their data. If significant others tend to self-disclose personal information, e.g., on social networks, some kind of social pressure can occur, eventually build on an idea of reciprocity, i.e., ‘if they disclose data it would be unfair not to do the same’ (Flender and Müller, 2012). Sometimes, the decision not to share personal data can even become a social stigma, for anyone who refuses to disclose his/her habits, actions and attitudes ‘must have something terrible to hide’ (Hull, 2015). Hence, actual behavior is most likely affected by social factors, whereas the expressed attitude supposedly reflects the unbiased opinion of the respective individual.

The Risk and Trust Model

It is most likely that the perceived risk of data-disclosing, as well as the trustworthiness of the recipient affects the data sharing attitude and behavior of an individual. Some authors explain the privacy paradox by assuming that trust has a direct influence on privacy behavior, whereas the perceived risk influences the reported attitude and behavioral intention. Still this influence is not strong enough to affect the actual behavior (Norberg et al., 2007). Trust, which is an environmental factor, has a stronger effect in concrete decision situations (i.e., behavior). The perceived risk, on the other hand, dominates in abstract decision situations, for example when a user is asked if s/he would be willing to share his/her data in a hypothetical situation (Flender and Müller, 2012), thereby producing the dichotomy between the reported attitude and the actual behavior.

Relying on quantum theory, Flender and Müller (2012) propose another explanation for the privacy paradox. If human decision-making underlies the same effects as the measurement process in quantum experiments, we can assume that the outcome of a decision process is not determined until the actual decision is made (Kokolakis, 2017) and two decisions are not interchangeable in terms of decision making (Flender and Müller, 2012). Hence, if an individual is asked about a potential decision outcome prior to actually making the decision (i.e., attitude rather than behavior is assessed), his/her answer does not necessarily reflect the actual decision outcome.

Another potential reason for the dichotomy between behavior and attitude is based on methodological considerations. One explanation may be the inappropriate operationalization of these constructs in the particular studies dealing with the privacy paradox (Dienlin and Trepte, 2015). Behavior is often assessed as a dichotomous answer (for example by asking if someone has a public Facebook profile or not), whereas attitude is measured on a metric (e.g., a Likert-based) scale. However, dichotomous data always implies a potential limitation of variance, which can in turn lead to a reduction of statistical power. Hence, it is possible that in fact there is a strong relationship between attitude and behavior and previous studies just failed to verify this relationship due to their inappropriate operationalization.

So far, no definite explanation for the privacy paradox has been proposed. However, considering the variety of possible explanations for the privacy paradox, either interpreting the phenomenon or developing extensive models to shed light on it, the dichotomy between privacy attitudes, concerns or perceived risk and privacy behavior should not be perceived as paradox anymore. To further understand which factors relate to user privacy, we report the standardized effect size (β) that could be found in the included studies concerning the association of the different predictor variables with privacy attitude, privacy concern, perceived privacy risk, privacy intention and privacy behavior in the paper.

Beldad A, Citra Kusumadewi M. Here’s my location, for your information: the impact of trust, benefits, and social influence on location sharing application use among Indonesian university students. Comput Hum Behav 2015;49:102–10. doi: 10.1016/j.chb.2015.02.047

Brandimarte, L., Acquisti, A., Loewenstein, G. (2009). Privacy concerns and information disclosure: an illusion of control hypothesis. In: Proceedings of the poster iConference

The following graph describes the relationships between variables that affect privacy attitude, intention, and behavior. 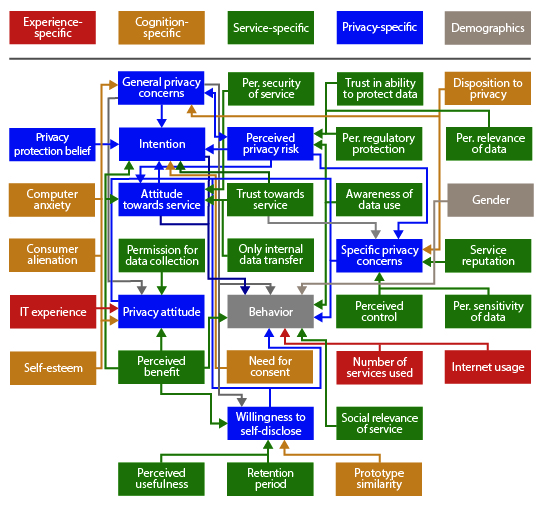