famous Werewolf card game. You can play it with your friends inside a WiFi network, so that everyone can use their own phone.

Play in the role of innocent citizen, a deadly werewolf, a magical witch or a mystical seer. The game master phone, with own voice output, will guide you through the different phases of the game, where you can play out different actions, according to your role. Witches can use healing or poison potions, seers can see the roles of other people, and of course there is the big voting, where the fate of one player is decided. In the end, it is your skill which decides who is going to win - werewolves or citizens!

How to play Werewolf with our app:

In the following points the Privacy Friendly Werewolf-app differ from other similar apps: 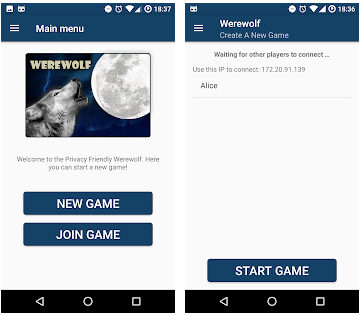